Bayliss’ rebirth a spectacle Tom McMahon, Staff Writer 04/29/2007 Water cascades down the cobblestones at the base of the fountain that serves as the centerpiece of the newly dedicated Bayliss Park. The fountain was officially turned on at the conclusion of the dedication. More than 1,000 people joined public officials, Bayliss Park fountain fundraisers, fountain donors and the artist as the new fountain was officially turned on Saturday in what master of ceremony Bill Ramsey called “the people’s park.” R.H. Fanders, portraying park founder Samuel S. Bayliss, told the enthusiastic crowd the land Bayliss donated for the park in 1853 was jokingly referred to as a weed patch at the time. “If you’re watching up there, look what they’ve done to Sam Bayliss’ weed patch.” 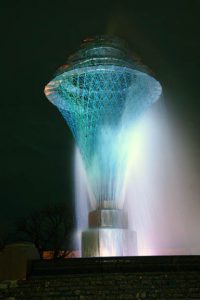 The shirt-sleeve-weather audience joined Mayor Tom Hanafan and Parks, Recreation and Public Property Director Ronald Hopp in a countdown to turn on the highly anticipated fountain. When the gathering hit one, a spray of water emerged from the central flute, cascading down the brick sides. Then the fountain erupted in water, mimicking the audience’s bursts of applause. Colored lights hit the sprays as the sun went down. To the north, children stood on top of water sprays shooting up from the bricks of the interactive fountain in the children’s play area. Parents and artist Brower Hatcher’s black squirrel sculptures looked on. Hanafan recalled April 30, 2004, when he received Hopp’s memo telling him the Bayliss fountain wouldn’t work anymore.

While that was a dark day for the city, Saturday night’s perfect weather matched the mayor’s mood. “It’s a proud day for all of us,” Hanafan said. “This is part of our heritage. We continue to hold (Bayliss Park) in our heart and in our hands.” Artist Brower Hatcher, of Providence, R.I., designed the park’s public art, including the fountain sculpture, the performance area dome, the black squirrels and the plaza furniture. “This is very touching and more than I could have ever imagined,” he said to the crowd. Brower named the fountain Wellspring. “It reminds me of the wellspring of support and goodness and the way this project came together,” he said. 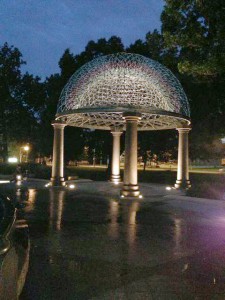 Several dignitaries touched on that theme, thanking the more than 2,000 supporters, state, city and county entities that donated more than $2.5 million to match a $2.1 million Iowa West Foundation grant to help fund the project. “I want to thank the great and generous people of Council Bluffs,” Hopp told the audience. “From 5-year-old Kayla, who donated $5, to the Iowa West Foundation’s $2.14 million donation that blew life into this project.”

Fundraising campaign co-chairs Doug Goodman and Dick Miller thanked all those who helped with the campaign and contributed to its completion. “I hope this project will be the cornerstone of a continued redevelopment of the downtown area,” Miller said. Iowa West Foundation Executive Director J. Todd Graham gave every indication that would be the case. He announced that four new public art projects will be unveiled downtown and at the Mid-America Center in the next 18 months.

Graham also invited the crowd back to the park July 1 to watch the world-famous Joffrey Ballet perform. He said the new fountain and art can bring tourism, art-related businesses and economic development to the city. “It is a source of pride and our creative energy.” No one in Sam Bayliss’ weed patch was disagreeing. ©SW Iowa News 2007